Energy storage and the Interflex EU-project

Strijp-S used to be known for the Philips factories and was also called the forbidden city. In the 1970s, more than 10,000 people worked who were only allowed to enter the site with a Philips pass. After years of economic growth, a crisis followed and Philips shrank enormously. They closed the factories and left for Amsterdam. At the beginning of 2002, the Philips site was bought with the future objective of turning it into a new creative-innovative center.

At the beginning of 2018, the European project that will test the energy system of the future was launched. The aim of Interflex was to investigate what is possible in the future within the existing electricity grid in order to develop the next generation of smart grids.

1 neighborhood battery of 300 kWh  was installed at the “living lab” in Strijp S, which can be used for charging electric cars. This battery is used to store energy when there is a large supply of electricity – for example through the yield of solar panels in the vicinity – and to release it again when the demand for electricity is high. The stored power in this neighborhood battery can also be used to charge electric cars. This neighborhood battery has a variable connection capacity. At times when the electricity grid is heavily loaded, the connection capacity of the central battery is temporarily lower, which means that the charging and discharging of electricity is slower. This prevents overload. Outside peak times, the capacity is extra high, so the battery works faster.

13 charging stations have been installed at Strijp-S for this project. 7 of these are located on the first floor of the parking garage ‘around the corner’, the others are on Philitelaan. Consumers receive financial compensation when they are flexible in charging their electric car. As a result, Enexis Netbeheer can significantly reduce peak times in one fell swoop, so that the network does not need to be upgraded.

ATEPS  has been closely involved in this project and supplied the battery. Sympower has developed software for the project that optimizes the smart charging and discharging of the battery in order to make maximum use of sustainable energy. The neighborhood battery is managed by Croonwolter&dros from Eindhoven. 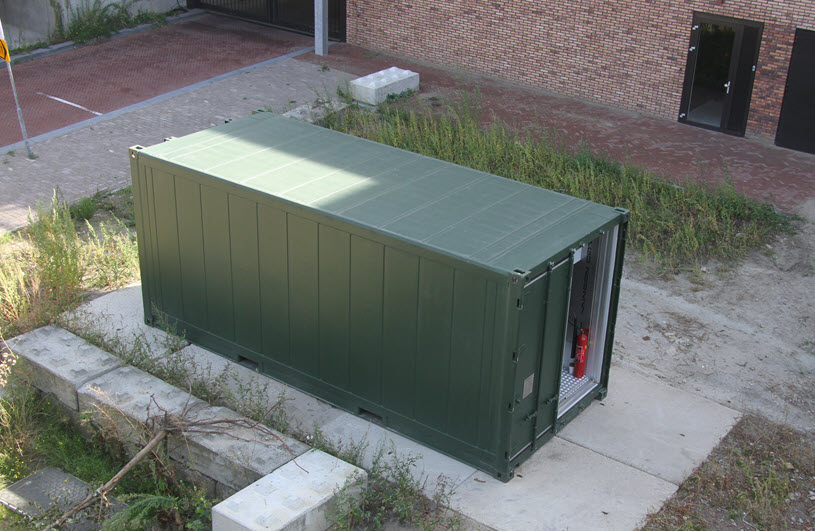 An explanation from Liander about this project